I may be one of the last people I know to still like reading hardback books, rather than on a kindle or I-Pad.  Hence my blog this week is about the Vogue On Vivienne Westwood book which was a Christmas present to myself last year.

I bought the book, because I didn’t know too much about Vivienne Westwood other than the fact she was British and previously married to Malcolm McLaren.  As an avid watcher of Sex and the City back in the day, she designed the infamous wedding dress (for the wedding that didn’t happen between Carrie & Big).   I remember it well.  Her name often popped up in fashion headlines for her unconventional dress sense too.

Tartan a favourite of hers 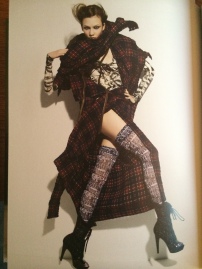 “I have an inbuilt clock that always reacts against anything orthodox” says Vivienne Westwood.

What I didn’t know was that she was a self-taught clothes designer.  She entered fashion in the early 1970’s with a store selling 1950’s memorabilia, then became more interested in biker clothes, zips and customised leather leading towards the Punk Era.  Vivienne drew particular attention to tartans, bodices/corsets, safety pins and ‘off-the-wall fashion’.  She would take these trademark designs with her, into many new collections from hereon in.

In the mid 1980’s she began to use underwear as outerwear, reinvented sportswear and began to twist more traditional garments such as nice suits and dresses with pagan elements, and interesting textiles/prints not generally seen together.  By the 1990’s she decided to dress more youthfully and less about her own age.  Personally I can’t see her ever having dressed age appropriately – hence why I like her. 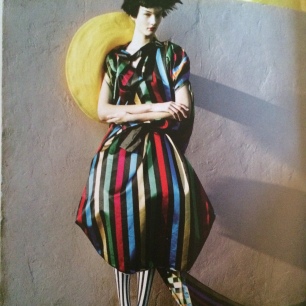 She is an individual in the truest sense of the word. Her creativity stemming from the fact “I never had anyone telling me what to do” she said. In 2006 she was recognised in the Queen’s New Year’s Honour’s List with a damehood, which she accepted from Prince Charles.

A strong champion of global warning, human rights and political strong viewpoints  this has often been exhibited in her catwalk collections.  One aptly entitled “Propaganda” (autumn 2005-06) – this stance has never changed and continues to be demonstrated to this day.

Not afraid of colour Anna Wintour once said “Vivienne Westwood is an unbelievable influence … It’s good that someone refuses to be all pale and beige and cashmere”.

In 2011 Vivienne Westwood marked 40 years in the fashion business.  A milestone for any designer.  Her global brand, and creativity doesn’t look to be slowing down with her imagination constantly challenged by what she sees.

They always have a character.

That’s why they have become classics.  They keep on telling that story’.

4 Comments on Vogue On Vivienne