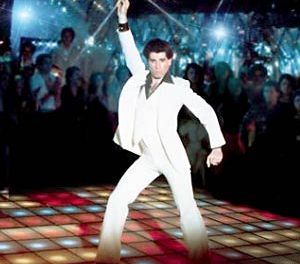 Movies often bring fashion memories to the big screen and the latest offering by film director Martin Scorsese entitled “The Wolf of Wall Street” was a fantastic portrayal of the late 1980’s early 1990’s.  Based on a true story, it depicts the life and times of a stock broker living in New York who engages in security fraud and corruption.

The men’s fashion was all about the power suit – pinstripes, shoulder pads, bold bright ties, complimented with a gleaming Rolex.  Everything matched (although not necessarily tastefully) and there wasn’t much attention paid to individual style.  For women it was all about the men with the money.  Sky-scraper stilettos and a strong whiff of Red Door or Samsara perfume left a trail behind you.  The female power suit (tight-fitting knee-length skirt and jacket).  The power colour was ‘red’.  It could take you places you’d never been.

On a slightly lighter note American Hustle’s fashion was all about the 1970’s and 80’s.  The film tells the story of brilliant con man and his cunning, seductive partner who are forced to work for an out of control FBI agent who leads them into a world of Jersey powerbrokers and mafia.

A little more under-stated – Women’s fashion was all about the plunging neckline, tight form-hugging dresses, think disco and sparkles.  For men it was all about mixing different textures; satin shirts, corduroy and cheap polyester.  The combination somehow gave the characters a lot of style.  Hair was king with the movie paying special attention to the ‘comb over’ which has never looked good on anyone and Christian Bale was no exception.

With both movies having some fantastic actors, my pick of the bunch was Bradley Cooper in American Hustle. Mind you, he could look good in a paper-bag.  I personally just love the 70’s disco era.  There looks to have been so much individual style on the streets.

I’ll leave it for you to decide which had the better fashion moments.

Copyright © 2022 Create a free website or blog at WordPress.com.